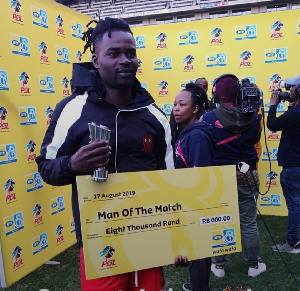 South African Premier League side TS Galaxy FC have announced the signing of Ghanaian player Mohammed Anas ahead of the 2021/2022 season.

The 26-year-old forward is moving to the Kameelrivier based club from Black Leopards FC.

Galaxy announced Anas’ capture on Sunday afternoon alongside seven other new signings as they continue preparations for the upcoming season.

Anas had a decent campaign in the South African top division last season where he notched two goals in 18 appearances for Leopards.

Galaxy will be Anas’ fifth club since his arrival in South Africa from eSwatini in August 2014 after playing Manzini Wanderers and Mbabane Swallows.

He has had stints with Maritzburg United, Free State Stars, Polokwane City before joining Leopards in November 2020.

Rev. Owusu Bempah Rains Praises On Mona Gucci For Comporting Herself In the course...

Killer lamps removed from 1,418 vehicles in one week – NRSA

Samuel Okudzeto Ablakwa: Beyond the obnoxious E-levy; a hard and frank look at public...