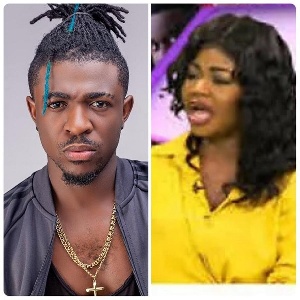 Donda, which is named after his late mother, Donda West is the tenth studio album by the American rapper and producer.

While speaking about Kanye West’s ‘Donda’ listening party on her show, JukeBoX on Saturday, Nana Adwoa Annan advised Ghanaian artistes to learn from the American rapper on how to promote their albums.

According to Nana Adwoa,” Look at the way a whole Kanye West is promoting his album. He slept at the stadium making sure that everything goes on well and I believe this is what our Ghanaian artists must learn instead of sitting at Onyx nightclub and be drinking when they release their Albums, EP”.

Reacting to Nana Adwoa Annan’s assertion as a guest on the show, ‘JukeBOx, Frank Naro unleashed a scanty attack on the hostess by indicating that:

“Let the crew here forgive me but I heard you say something about Kanye West. As I sit here, I am personally not happy with what you said

“For you to have said that when a Ghanaian artiste releases an album/EP then he/she will be sitting at Onyx nightclub drinking instead of promoting it I think that comment was unfair”, Frank Naro jabbed Nana Adwoa

Overly disdained Frank Naro added that “You have to apologize because there is no way an American TV station would promote Ghanaian artistes like what you did, We have to promote our own because after all, I am a Ghanaian artiste sitting on your show”.

Former Wesley Girls Pupil Cries Bitterly As She Begs To Be Saved From her...

We were only defending ourselves – Concerned Katangees