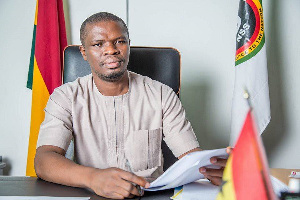 The GFA for the first time in three and half seasons organised one of the most competitive seasons in the annals of Ghana Football that saw Accra Hearts of Oak emerge champions of both the Premier League and the MTN FA Cup.

Hasaacas Ladies also had a remarkable season after winning the Women’s Premier League and the Women’s FA Cup – their first double in history.

In a speech read on his behalf by his aide Mr. Eric Mensah Bonsu during the launch of the Division One League Super Cup on Wednesday, the Yagaba-Kubore lawmaker was full of praise for the GFA for staging one of the best seasons ever.

“Let me commend the Leadership of the Ghana Football Association on the successful completion of a very competitive League season,” Mr. Ussif said.

‘’For various reasons, Ghana Football has been a lot in the last four years – from the Anas Expose to the days of Normalization and later to COVID-19. Indeed we have been turbulent times but the energy and commitment shown by this administration gives me joy and satisfaction.

“I am told the MTN FA Cup final on was well competed for and the better side won the day. On that note, I would like to congratulate Champions – Accra Hearts of Oak on winning the Ghana Premier League and the MTN FA Cup. Congratulations to the GFA and Partners StarTimes, Macron, Melcom Group, MTN, Woodin, NASCO Electronics, Decathlon, IntercitySTC among others for putting together a fascinating League season.

‘’It is my wish that it will impact positively on the football ecosystem and our National Teams,’’ he added.

Next season’s League competitions will kick off on the weekend of Friday, October 29 to Monday, November 1, 2021.

Sweet Bromance! – Jupitar Carries Shatta Wale Like A Infant To Breastfeed Him In...

Whether I Do Yansh or No Do Yansh, I’m Still the Queen – Angry...

Unfortunate Scenes From The Remaining Burial Rites Of 10-Yr-Aged Ishmael Mensah Hits On the...