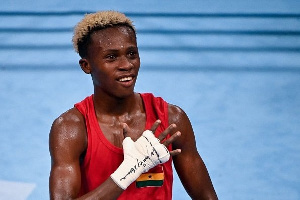 Takyi won Ghana a medal at the Olympic Games

The Local Organizing Committee of the 2023 African Games has issued a statement of congratulations to Ghana’s team at the just ended 2020 Olympic Games.

The statement from the media sub-committee commended the athletes and boxers for their performance in their respective competitions.

“The LOC for the 13th African Games extends its warmest felicitations to Ghana’s Olympic Team for the modest success recorded during the 2020 Tokyo Olympic Games.

“The LOC commends all fourteen athletes from the five disciplines that represented Ghana in Japan. You deserve every commendation for the magnificent display of patriotism and can-do spirit. “

The statement singled out boxer Samuel Takyi for praise for wining Ghana its first Olympic medal in 29 years.

“We seize this opportunity to say ayekoo to Ghana’s sole medalist Samuel Takyi for demonstrating admirable zeal in your quest to end Ghana’s media drought at the Olympic Games since 1992.

“By this achievement, you join the elite class of Olympic medalists from Ghana including Ike Quartey, Eddy Blay, Prince Amartey and the Barcelona 1999 soccer squad” excerpts of the statement read.

The LOC expressed conviction that the performance of the Olympic team will serve as a platform for further success in the 2023 African games.

Ghana finished 86th on the medal zone of the Olympic Games and was ranked the 10th best African country at the event.

Jupitar must apologize or encounter my wrath lyrically