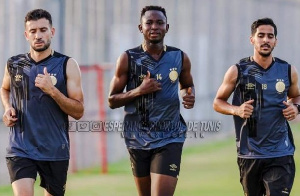 The Black Satellites and former Dreams Football Club striker Percious Boah (18) completed his move to Espérance Tunis on a four-year contract on Thursday.

The teenager arrived in Tunisia on Wednesday and underwent his medical examination before signing his contract.

Ghanaguardian.com brought to you news that the talented youngster is on the brink of completing a move to the Tunisian giants.

He was the star of the African U-20 Youth tournament in Mauritania in March as he scored some breathtaking freekicks and long range strikes as Ghana won the tournament.

Boah scored 3 goals in 6 appearances to ensure the Black Satellites lift the ultimate at the end of the tournament.

Boah was recently invited to the Ghana U23 squad that faced the Olympic teams of Japan and South Korea in international friendlies in June.

‘Whoever took the decision to stop road toll has caused financial loss to the...

Which Ghanaian artiste headlined a show in Nigeria this Xmas?

6 decades after Ebola killed about 11,000 people, West African nations are bracing for...