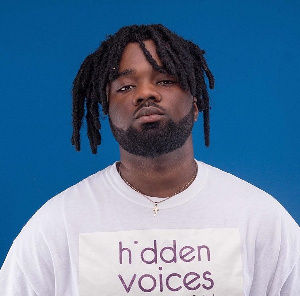 Popular Ghanaian musician, Michael Takyi-Frimpong, was known by the stage name Lord Paper has revealed his intentions of becoming the next president of the Musicians Union of Ghana(Musiga)

Legendary Highlife Musician, Bessa Simons has been appointed as acting President Of Musiga by the Union’s National Executive Council (NEC).

This follows the end of the tenure of the Bice Osei Kuffour better known as Obour – led administration which ended on August 11, 2019.

The ‘Belembe’ hitmaker’s appointment was confirmed at a meeting on Friday, August 30, 2019, and he is expected to lead the body until the national executive elections take place.

Speaking in an exclusive interview with Nana Adwoa Annan – host of entertainment show ‘JUKEBOX’ on Atinka TV, Lord Paper who was answering a question in line with whether he has any intentions of becoming the president of MUSIGA, stated emphatically that:

“Yes, I am ready to grab the opportunity. I will be the President I don’t mind if it comes to mind because I think those managing the industry now are playing with it”. Lord Paper told Nana Adwoa Annan

According to the popular Ghanaian soul, afrobeat, and hip hop musician who shot to fame in 2016 after releasing his controversial single track titled “Awurama”, “We can get songs like what Wizkid is doing the industry is like gold but I don’t know if they’re not seeing it or someone is just making fun of it those managing it don’t have the requisite knowledge in managing such an industry”.

Watch the interview below:

Last year was like hell for me – Xandy Kamel reveals