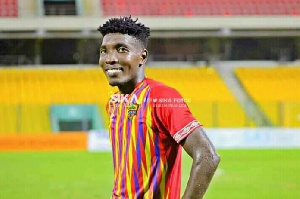 Afutu emerged as one of the club’s best players in the recently-ended season in which Hearts of Oak, against all expectations, bagged the double.

Having achieved domestic success, their focus is on excelling in Africa but they would have to do it without Afutu.

This is because the club could not reach an agreement with the 25-year-old to continue representing them.

Hearts of Oak did not include Afutu in their CAF Champions League squad paving way for him to leave the club.

According to Takyi, reports that Afutu snubbed Hearts of Oak because of a better deal abroad are untrue.

“No club has contacted Afutu both domestic or abroad. So at the moment, Benjamin Afutu is clubless.

“I will like to state clearly that money was not a bone of contention in the contract extension.

Meanwhile, Hearts fans shouldn’t be angry with Afutu we are still waiting for the drafted contract from the club,” Takyi said on Monday night.

However, per Ghanasoccernet.com sources, the club won’t hand him the new deal due to his unavailability for Champions League.

Police Nab Woman Who Has Been Using Human Meat As Khebab For Public Consumption...

CAF Champions League: It will choose a miracle for Kotoko to qualify

Really don’t depend on your youngsters when you retire, its a funds slip-up –...