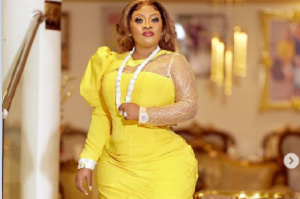 • Some interesting and unexpected moments were captured during Bofowaa’s party

• The all-white event was graced by several dignitaries

First lady of the Anointed Palace Chapel, Ciara Antwi popularly known ‘Bofowaa’ was celebrated in grand style at a plush birthday party organized for her on September 2, 2021.

Master-minded by her husband, Rev. Obofour, the event which was held at their East Legon residence was characterized by some exclusive, yet interesting moments.

Although the spotlight was cast on the main celebrant and how splendid she looked on her day, GhanaWeb has identified some events that took place on the flip side.

Let’s take a look at some of these interesting activities

The party was well-attended by the crème de la crème including royals, politicians, pastors and so on but slay queens also represented in full force.

The manner in which these individuals crowded the venue in their skimpy clothes coupled with their see-through clothes makes one wonder whether some sort of invitation was required.

Not forgetting the fact that, the event was meant to celebrate a pastor’s wife and as such, it was expected that attendees should be well scrutinized.

Well, I guess it’s the turn of the ladies. Their husbands earlier reconciled, so it is somewhat expected that they seal the reconciliation.

Of all the happenings that night, the instance where Rev. Obofour’s wife and Bishop Daniel Obinim’s wife took to the dance floor was a moment to behold.

The two were captured embracing each other while they danced the night away.

They all rallied around the celebrant and offered powerful prayers for her.

Aisha Modi was missing at the event

Aisha Modi has been captured in several instances saying she is capable of laying down her life for Rev. Obofour and his wife.

Perhaps, the love wasn’t strong enough as she could have hopped on the next available flight to grace her ‘godmother’s’ birthday party.

Although she was keeping taps of the event on social media, some individuals are of the view that Ayisha, who is currently in the United States, has no better justification for her absence the party.