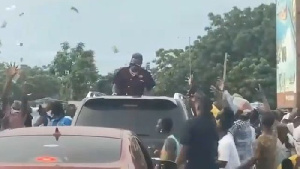 • According to an entertainment critic the act is disrespectful

A host of Ghanaian artistes have been spotted in several instances, throwing money into a crowd usually made up of die-hard fans who troop to locations just to catch a glimpse of their superstars.

Some say that the act of spraying money into a crowd is to show love to the people who support the music and craft of these artistes.

Dancehall musician, Shatta Wale, in a recent post on Instagram, gave explanations as to why he decided to spray money into a crowd that had mobbed his convoy during his visit to Ada.

The post sighted by GhanaWeb was captioned: “We are made by the fans. We are shaped by the fans. The fans make the music. The fans grow the brand. We need not be billionaires to show them love when we can. Whatever little we have, could bring a smile. #4lyfis4lyf!. Shouts to the SM massive in Ada! #2muchluv #Paapaapaaapaapaapaa.”

But reacting to this phenomenon, entertainment critic and creative brands communicator, Nana Yaw Wiredu on Bloggers’ Forum, told host, Abrantepa that throwing money into a crowd is disrespectful.

According to him, the act does not show respect to the people who have to scramble for the money.

“I could be wrong but anybody who throws money does not respect the people he is throwing the money to. Hand it over.”

He explained that it is only right for the person to present the money or stand close to the individual and spray their money on them.

“That is done person-to-person, you might be moved by a dancer or even spray money on couples at a wedding. You don’t throw the money into the crowd, you go to the couple and put the money on them. Even when an artiste is performing someone goes on stage and puts the money out of respect on the person,” he noted.

Black Satellites good results at U-20 AFCON should really mark a new era of...