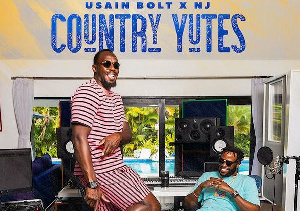 Usain Bolt is proving he can as well finish first in anything other than track and field after his collaborative debut album, Country Yutes, topped the USA iTunes Reggae Albums chart on Sunday. The pole position was initially held by Bob Marley and The Wailers’ Legend album.

Released September 3, the 14-track album, which was entirely recorded in Jamaica, is a collaborative project between the retired Olympic champion and his longtime friend, Nugent “NJ” Walker. In an interview with Jamaica Observer, the 35-year-old shared his excitement about the album’s overall success.

“Any association with the legendary Bob Marley is a significant blessing to us. It’s a truly humbling feeling for us,” Bolt said. He added the reception has been very encouraging.

“The response to the project has been brilliant. We are humbled by the response of the fans because we worked very hard in studying the craft and just felt we would show our growth in music by putting out this album,” he said.

The album title pays homage to Bolt and Walker’s upbringing – something he said was imperative for them to represent. “Being from the rural area of Jamaica which most people call ‘country’. We always just owned that name and we felt that we needed to represent. So, it was the perfect title for us,” the Olympic record holder said.

Bolt also told GRAMMY.com the album name is in reference to the challenges they faced when they moved to Kingston from the country side of Jamaica. “Yeah, that’s where I’m from. It’s something that I came up with true to life,” he said. “When we came to Kingston, we faced some challenges like oh, we’re from the country. We got some negative feedback, some classicism. We’re country. That’s how we came up with the actual name of the album.”

Bolt also explained why music and sports are intertwined and the phenomenon behind athletes and musicians wanting to trade jobs. “We enjoy music as athletes. It helped hype us up or calm us down depending on the type of genre,” Bolt said. “For the artists, it’s all about the hype to come to a sporting event to watch athletes perform at a high level. For me I’ve really been into that from a young age.”