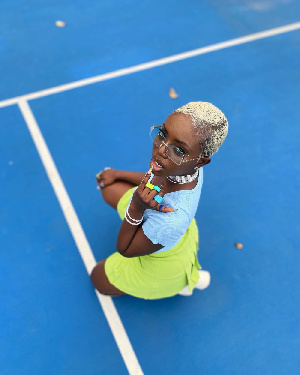 From an outlandish Breaking Newsesque prelude to scenic shots of nature – all in the thick of what seems to be an ongoing class session, Sierra Leonean songbird, Dove Nicol takes viewers on a colourful reverie in her self-directed video for ‘Calm Down’.

The new video lights up with an eerie telecast that sees a masked Dove Nicol share the message: ‘’CALM DOWN YOUR STATION HAS BEEN HI-JACKED’’, right before viewers are reeled into a sequence of shots that end in the classroom and with a cheeky sketch too.

A formal introduction to ‘Calm Down’ then plays onscreen like the good old DVDs from back in the day, offering both closeups and panoramic shots of Dove Nicol in traditional garb, together with her bevy of dancers in scenes best described as dreamy. Things switch to a more urban setting thereafter and outside the classroom, depicting the artist’s time on campus and beyond in a vlog-styled format. The self-directed video simply doesn’t run out of exuberance moving forward, alternating between a burst of colourful shots which end in a cliffhanger with a surprise cameo from Rahim Banda.

Dove Nicol is set to become one of Ghana’s most-streamed artists with ‘Calm Down’ serving as a powerful introduction and the perfect platform to showcase her authenticity and unique style.

Dove Nicol is a female artist from Sierra Leone who is currently based in Ghana. She fully embarked on her music dream in 2021, debuting with the wonderful ‘Calm Down’ back in May of the same year. Dove plans to centre her future compositions on a blend of culture and genres, delivering a compelling effect on music lovers both far and wide.

We should embrace our culture – DJ Nickie to Ghanaian artistes

No revenue paid out to Shatta Wale, Agya koo

Hearts of Oak knocked out of CAF Champions League after 6-1...