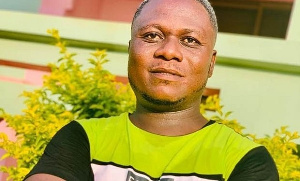 Ghanaian filmmaker and movie director, Frank Gharbin, has disclosed that he has received confirmation that his illness is a spiritual attack however, he cannot reveal who is behind it due to some reasons.

Speaking with Doctar Cann on Happy FM’s Ayekoo After Drive show, he explained that the spiritual and herbal center that gave him this confirmation and is currently giving him treatment does not reveal the person behind the attack.

According to him, due to cases of people murdering those who are accused of such acts, the Centre rather reverts the curse or illness to whoever caused it so that he or she gets a feel of his own cane and then confesses when they cannot take the pain anymore.

“When the person suffers his own curse, he will come out to confess and we will all know who it is”, he said.

Frank told Happy FM that he just started the course of treatment with the spiritual and herbal hospital, hence, he will need a day or two to be able to decide if there is actually any progress. He also went on to call for support for the Kumawood industry, as well as financial support for him to be able to complete projects that he has started since he has spent all his money on drugs and hospital bills.

‘Superhero’ by E.L the most streamed Ghanaian Hip-Hop song on Spotify

Mentor gave me fame it did not make me rich

Hene Aku Kwapong: Finally, an initiative to develop an prospect for wealth generation for...

‘Superhero’ by E.L the most streamed Ghanaian Hip-Hop song on Spotify