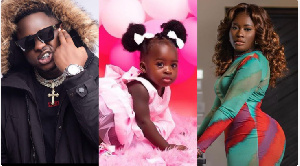 play videoMedikal with his wife, Fella Makafui and their daughter Island Frimpong (Middle)

Popular Ghanaian rapper Medikal has stated that his daughter’s looks sometimes confuses him due to how fast she is growing.

According to Medikal, Island’s situation has left himself and his wife, Fella Makafui in shock because she keeps changing as she grows.

In an interview with HitzFM which has gone viral on social media, Medikal disclosed this at the later part of the conversation where he was asked about his daughter’s well-being.

The AMG rapper explained that as children grow, they keep changing until they attain a particular age adding that it might be exactly what is happening to Island.

Medikal also stated that currently, he is unsure whether the baby looks like him or her mother, Fella Makafui.

“Island is growing very fast. At this point, I can’t tell if she looks more like me or her mum. When kids are growing, they keep changing until they get to a certain age and it is maintained. She’s growing fast, she just turned a year old,” he stated.

Watch the video below;

There is certainly Almost nothing Completely wrong In Education Obinim – Even Jesus Christ...

Hearts, Desires FC only clubs to have contacted King Faisal for Kwame Peprah –...