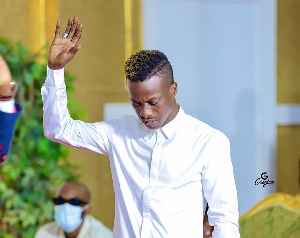 Ghanaian musician Kaakyire Kwame Fosu also known as KK Fosu has pleaded to the government to fix Asuoya-Mangoase bridge which is on the verge of collapse.

The bridge which links to Koforidua, capital of Eastern Region has been badly damaged due to rains that have pummeled the region in the past few days.

In an interview with the Legendary Ghanaian musician, KK Fosu expressed worry over the state of the bridge which he believes should be fixed to prevent any misfortunes.

“The bridge is that bad that it has to be fixed in the short possible time. The bridge connects most of the towns and villages in Akuapem North area and I want to plead with the government to fix it.”

“The roads are not too good as well but I pleaded with the authorities to come to our aid by fixing the bridge,” he said.

KK Fosu who is an indigene of Mangoase also pleaded with government to fix their roads which has been in a bad state over past years.

Back in 2020, KK Fosu staged a demonstration over the poor state of the roads which is still yet to be fixed.

President of Afrexim bank forewords GITFiC’s book on the AfCFTA

Tyler Perry took care of a legendary actress for last 15 years of her...

Arsenal fans in Ghana donate to orphanage during Christmas