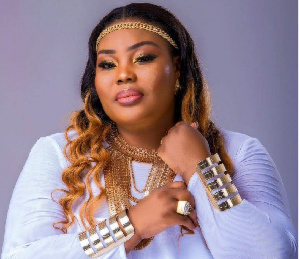 Ghanaian Gospel musician Ceccy Twum has revealed that her music career flourished after legendary and adorable music trio Daughters Of Glorious Jesus laid their hands on her.

The sensational contemporary gospel singer made the revelation on Atinka FM on Sunday during a live conversation with Roman Fada.

Apparently, the talented and legendary gospel trio “directly or indirectly” inspired many young musicians in the country.

According to Ceccy Twum, she started developing a love for the Daughters Of Glorious Jesus at a very young age, and till now, the love she has for them is simply unmeasurable.

Throwing more light on the beginning of her music career, after acknowledging the tremendous support from her husband, she narrated how instrumental Daughters Of Glorious Jesus have been in her musical journey.

The songstress shared with Roman Fada how she first met the legendary gospel music group. At the launch of their timeless album, Ceccy Twum had the opportunity to meet them, and it was such a memorable moment.

She knelt before them, and they all laid their hands on her and spoke positive words on her life and career.

From 2005 when she released her debut album, “Megyefo Ne Yesu”, she has been extremely amazing till today.

The brand ‘Cecy Twum’ is well positioned; it’s really huge in Ghana and many parts of the world.

She has worked with great musicians from Ghana and other parts of the world. Notable among them are Nathaniel Bassey, Sinach, Mercy Chinwo, Frank Edwards, all from Nigeria, arguably the biggest music market in Africa.

Bisa Kdei deserved 2015 VGMA Artist of The Yr, not E.L