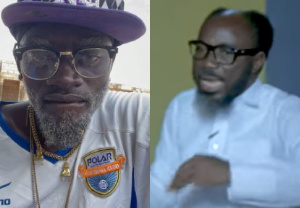 Ghanaian actor, Big Akwes, has reacted to his feature in LilWin’s music video.

Zionfelix.net shared a video of Big Akwes featuring in a yet-be-released video of LilWin earlier.

Many people were shocked about it because Big Akwes has been making demeaning comments about LilWin lately.

However, Big Akwes has explained in a rebuttal video that the music video was shot about two (2) years ago.

He stressed that LilWin should be told the bitter truth.

Big Akwes was also not happy about the caption that the video was new.

He further warned Zionfelix to be cautious of whatever he writes about him.

Watch his reaction below:

Album of the week: Songs of Peter by Fameye