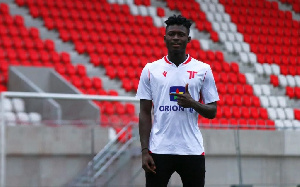 Joseph Amoah, scored for FK Rudar Prijedor who were held at home by FK Sloboda Tuzla

The 19-year-old forward scored for FK Rudar Prijedor who were held at home by FK Sloboda Tuzla.

Amoah opened the scoring of the encounter with a strike in the 30th minute at the Gradski Stadion in Prijedor.

Amoah has been lethal in the Bosnian elite division this campaign having scored 4 goals in 9 appearances so far.

The youngster is three goals short of the top scorer of the Bosnian Premiership with 7 goals.

Don’t at any time forget God when you get all you prayed for –...