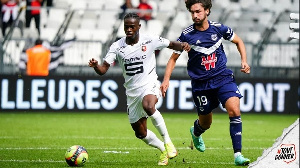 Ghana sensation, Kamaldeen Sulemana has no surprises at his scoring form at Stade Rennes as he heads into the game against PSG on Sunday with confidence.

The 19-year-old has been decent for Rennes since he joined in the summer from Danish side FC Nordsjaelland.

Sulemana has scored four goals so far in the season, three in the French Ligue 1 and the other goal in UEFA Europa Conference League.

Sulemana claims he learns every day and that helps him to get on the scoresheet during matches.

“I always believed in myself that I could score goals. With training, I learn every day, especially in my ability to shoot and I think that helps me in a match,” he Ouest-France in an interview.

However, the teenager feels he could have hit more goals if he had handled certain actions better.

“I could have scored more goals if I had handled certain actions better.”

The Right to Dream Academy graduate has 4 goals in 11 appearances in all competitions and hopes to add more as the season keeps getting better.

JoyNews Editorial: The promises of Dr. Bawumia versus the current state of the economy

Shatta Wale Unveals The Gorgeous Entreprenuer That Will Be Responsible For His Reign Apparel...