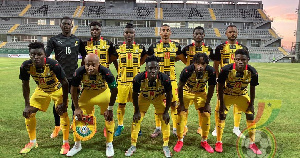 Black Stars will commence training on Tuesday ahead of their 2022 FIFA World Cup qualifying match against Zimbabwe on Saturday.

According to the Ghana Football Association (GFA), 27 out of the 32 invited players are expected in the team’s camp.

The team is expected to travel to Cape Coast Tuesday afternoon – where they will train in the evening.

Meanwhile, England based right-back Andrew Kyereh Yiadom who plays for Reading FC is currently being assessed after picking up a knock on Saturday during a Championship game against Cardiff City.

Ghana is scheduled to play the Warriors of Zimbabwe in a doubleheader with the 1st leg set for the Cape Coast Stadium on Saturday, October 9, 2021.

I produced Hearts of Oak win the champions league