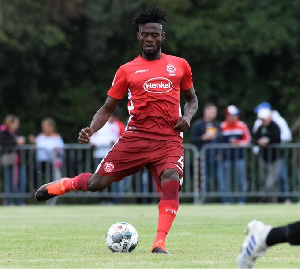 Ghana defender Kasim Nuhu Adams has confirmed that he will be leaving German Bundesliga side Hoffenheim in the January transfer window.

The 26-year-old is yet to feature for Hoffenheim in the ongoing season despite not being injured.

The former Fortuna Dusseldorf defender has been relegated to the bench and has not made the matchday squad after round seven game in the Bundesliga.

According to the former Medeama SC player, he lost his position because he defied the club’s order against playing for the Black Stars.

Speaking in an interview with Tarkwa-based radio station Medeama FM, Kasim Adams confirmed he is in talks with another club over a potential move in January.

He added: “For now, I cannot disclose the name of the club. I will plead with the public for now. I will disclose it at the right time but for now it has to be between me and the club”.

Kasim Nuhu Adams joined Hoffenheim in 2018 making a total of 39 appearances in the German topflight across three seasons.

GHANASoccernet.com can reveal the strong guardsman is unhappy and could make a return to Switzerland to rejoin former club Young Boys.

On my part, I have ended the marriage – Xandy Kamel insists

Chioma Reacts Next Experiences That Davido Has Welcomed New Infant With A different Girl...

Fantana called out for allegedly enhancing her body