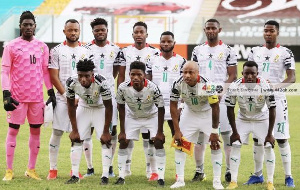 The Black Stars of Ghana recorded an impressive 3-1 victory against their Zimbabwean counterparts in the third Group G match of the African qualifiers for the 2022 World Cup.

Goals from Mohammed Kudus, Thomas Partey and Andre Ayew ensured three points for the Black Stars who stayed in second with six points and just a point adrift of leaders South Africa who have accumulated seven points after beating Ethiopia 3-1 in other group fixture.

Ghana got off to a blistering start with a sensational strike from Kudus Mohammed who curled in a stunner in the fifth minute.

The Black Stars were very impressed with their play in the opening minutes as they pressed the Zimbabweans in search of the cushion goal.

Kudus Mohammed nearly grabbed his second goal of the game but his effort on goal was feeble and safely gathered by Zimbabwean goalkeeper Washington Arubi.

Ghana were certainly on the front foot in the first half and were the more dangerous in attack with the Warriors often left to try the luck from long range.

Ghana held onto their lone strike as the game went into recess.

The Warriors started the second half with a more purposeful intent and were awarded a penalty in the 47th minute of which their Captain Knowledge Musona stepped up from 12 yards and restored parity.

The visitors nearly took the lead in the 57th minute but Jordan Zemura’s effort struck the post.

Substitute Benjamin Tetteh had a glorious opportunity to put Ghana in-front past the hour mark but skewed his effort wide.

The game was very opened with both sides looking to take the lead and Ghana Captain Dede Ayew came close but his effort clipped the foot of the post.

Thomas Partey put Ghana in the lead with a sublime effort in the 66th minute after he dazzled past two defenders and struck the ball past goalkeeper Washington Arubi.

The last quarter of the game saw the Warriors stage series of attacking incursions but Ghana goalkeeper Jojo Wollacott did produce equally good saves to deny the visitors.

Dede Ayew finally got on the scoresheet after he delivered a ferocious header past Zimbabwean goalkeeper Arubi.

The Black Stars held on to secure all three points.

Abronye DCE is a Stupid Fool- I Can Feed Him and His Entire Family-...

MTN FA Cup : Hearts and Kotoko could meet in final after quarter-final draw

‘Our Bill does not criminalise adultery and fornication’ – Dafeamekpor