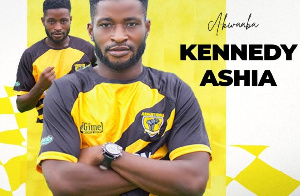 It’s a long time ago when Kennedy Ashia was a household name in Ghana due to his exploits with the Ghana U-20 national team but after a lengthy sojourn around the world he has landed at AshGold.

The former Liberty Professionals winger has signed a two-year contract with the miners with the deal anno0unced by the club on Saturday, 9 October 2021.

AshGold have finally had their man six years after he swerved them for Sudanese giants Al Hilal when they thought they had beaten off competition from Kotoko and Hearts.

Young midfielder Aminu Adams from Kintampo Royals signed a five-year contract and another younster Abdual Salam has joined on a three-year contract.

Midfielder Joseph Amoah has moved to the Obuasi-based side on a three-year deal.

I was psyched up for VGMA trolls – Kidi

Jordan Ayew’s ideal is but to appear- Odartey Lamptey