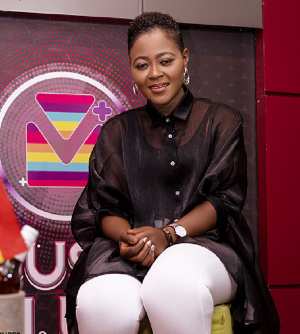 With close to a year in the Gospel music scene, reputable music critics had already declared the singer-songwriter, Minister Yvonne to be one of the best Gospel musicians in the history of Ghana, and across the continent.

Now, the prophecy is fulfilled, the numbers have spoken, the data has assembled into integers and decimal points, and the answer is in KabFam Ghana Music Awards UK 2021.

The awards ceremony was held at Royal Regency in North London.

Receiving the award, Minister Yvonne thanked her teeming fans, family and management team for their unflinching support and also voting for her.

She expressed gratitude to the organisers of the award programme, Alordia Promotions and West Coast for celebrating the achievements of homegrown Ghanaian musicians and producers across the UK and Ghana.

The outstanding vocalist who doubles as HR Specialist with the British Armed Forces songs encompassing “Conqueror”, “Unchangeable God” and “Besuka” which have received wider acclamation and laurels in the UK including topping charts in the UK Gospel fraternity and winning UK’s WWGMVA Best International Video of the year award with the song “Besuka”.

Minister Yvonne is undoubtedly making Ghana proud with her talent in the UK.

Ebo Whyte’s ‘The Secret Code of Wives’ gives meaning to the saying ‘after God, fear women’

If Olympics lead by three points, other teams should concede- Annor Walker

My Family Have Disowned Me For Coming On Date Rush To Look For Women-...

Davido’s Daughters Hailey And Imade Dangle Out Collectively As Their Father Hangs Out With...