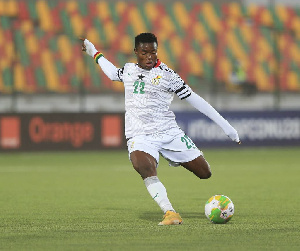 Earlier reports in the local media suggested that the Black Stars playmaker has secured a move to the Still Believe lads ahead of the 2021/2022 Ghana football season from Steadfast FC.

The reports further indicated that the 17-year-old will join Dreams FC for a short spell before moving to Sporting Lisbon next year when he is 18-years.

But in an interview with Kumasi-based Pure FM, the player’s local agent denied these reports.

“Dreams have not contacted me or whatsoever. Fatawu is a player of Sporting Lisbon. They have signed Fatawu for three years,” he told Kumasi-based Pure FM.

Fatawu recently made his debut for the Black Stars against Zimbabwe in the 2022 World Cup qualifiers.

Does My Tummy Pay Your Bills? – Xandy Kamel Destroys Troll For Talking About...

Dr Kwaku Oteng Opens His Garage And Shows His Fleet Of Cars And Mansion...