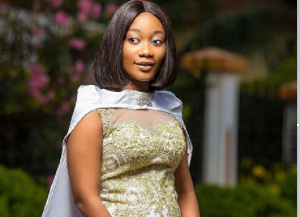 Ghanaian singer, Adelaide Naa Borley Bortier Afutu, popularly known as Adelaide The Seer, has disclosed that her song, ‘Wire Me’ inspired a lot of people because of the message it carries.

According to Adelaide The Seer, her childhood dream is to be in a position where she can put smiles on people’s faces and her song ‘Wire me’ impressed many and it has pushed her to do more.

“On the other hand, I hear comments like, it is not true, she is not blind, she just needs attention, or she is just taking advantage of the fact that she is visually impaired to enter the media space. And those comments, I don’t see it as a joke, so I won’t play with them. Those are the kind of comments that really get me down.” She stated.

The singer, 25, born Adelaide Bortier, came into the limelight, when she was featured on a song with Twin Musicians, Dope Nation titled ‘Wire Me’.

Adelaide has two collaborations with Dope Nation with the latest being “What A God”.

‘Obaa No Bro Beema No So’ – Social Media Consumers Respond Immediately after Photo...

Hajia 4real And Baby Daddy Are Allegedly On The Wanted List In The US...