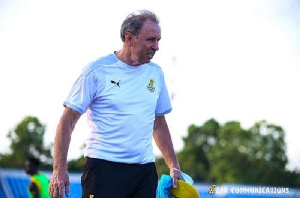 Former Ghana defender, John Paintsil, has disclosed why coach Milovan Rajevac succeeded in his first games with the Black Stars after his re-appointment.

The Serbian trainer is back for a second spell and has hit the ground running with a back-to-back victory against the Warriors of Zimbabwe keeping the World Cup qualification hopes alive.

In an interview, John Paintsil who worked with the 67-year-old in his first spell indicated that his unpredictable nature makes it difficult to work under him.

“Milovan Rajevac believes in more tactics, he looks at his opponent and builds from his side. He works on how to hurt his opponent.

“If you are a player and you listen to his instructions it works for the team. He makes sure players play to his roles and if you don’t play the way he wants he will sideline you and that’s how Milo operates.”

“He is a very difficult coach to work with, you can’t predict him, you will never know whether you are playing or not,” he said.

Some 155 million individuals endure from hunger in 2020 – UN

Use TapTap Send Promo Code ‘TopChris’ to Get Free of charge £5–Send Income to...