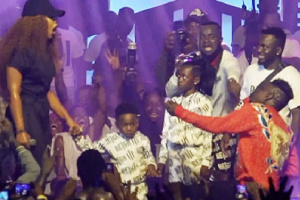 Two years ago on October 13, 2018, Shatta Wale joined Michy on stage midway through her performance at the Reign concert and asked her to marry him.

The lenses of GhanaWeb captured visibly shocked Michy who showered Shatta Wale with hugs and kisses while their three-year-old son, Majesty, wandered on the stage.

In what appeared to be a reunion after news of their breakup flooded social media at that particular time, the two kissed for almost a minute with patrons cheering them on.

The proposal was sealed with a performance of their song, ‘Low Tempo’ after which Shatta Wale performed ‘Bulletproof’ by way of assuring Michy of love and security.

One can recall that Shatta’s ‘Reign’ concert and album launch was held on Saturday, October 13, 2018, at the Fantasy Dome in Accra.

The event attracted thousands of music enthusiasts and fans. Asides Shatta Wale and Michy, The Militants, Xylo, Smokey Beatz, and Efe Keyz were among artistes who graced the stage.