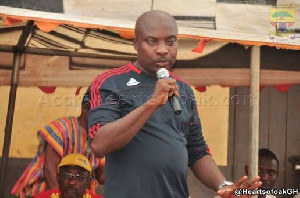 Communications Director of Accra Hearts of Oak, Kwame Opare Addo, has promised the fans that the team will beat Moroccan giants Wydad Athletic Club in the first leg of the CAF Champions League.

The Phobians will host the Moroccans in the first leg of the second preliminary round of the CAF Champions League on Sunday, October 17, 2021.

The Phobians defeated CI Kamsar in the preliminary round to set up this clash with the 2016 CAF Champions League winners.

According to Opare Addo, Hearts of Oak has been preparing for the game after their win against CI Kamsar.

“After Kamsar win we were back to business to make sure we have to keep focus and our mental strength in the highest level so that when we face WAC we will be able to put smiles on the faces of every Phobian.”, he told Happy FM in an interview.

“We have been working on that and by Sunday the technical team will have corrected any mistake so we will be able to perform well”, he added.

Prime 6 NDC, NPP marketing campaign music we will bear in mind during elections