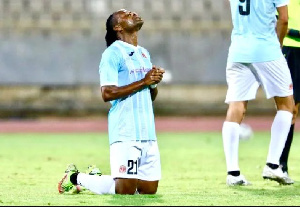 The 27-year-old starred as Aradippou defeated Nea Salamina 3-2 in the biggest game of the Fist Division on Cyprus.

Nea Salamina wasted no time in taking the lead after Juan Filipe scored just eight minutes into the game but Albert Bruce and his teammates rallied back as Papa Alioune Diouf leveled after 30 minutes.

The hosts returned from the break more determined and just two minutes into the second half the Senegalese forward added his second of the game.

Papa Alioune Diouf completed his hat-trick with ten minutes left but Nea Salamina had a late consolation through Roman Golobart.

Albert Bruce lasted the entire duration as Ermis moved to seventh with the win against Salamaina and are now just two points behind leaders Olympias Lympia.

Pics of the ‘Editors’ editor’, Saeed Ali Yaqub as he goes house

‘Our Bill does not criminalise adultery and fornication’ – Dafeamekpor