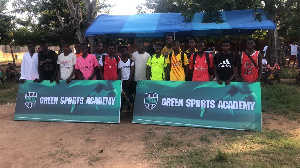 A section of the players

The aim of the gala is to unearth talented players, and according to organisers, they were able to achieve it.

They found the best of talents in Dzodze in the Ketu North District.

“The program which was a success, just like the previous one’s held at Ave-Xevi and Akatsi on October 2 and 9 respectively has unearthed skilful and talented players. The final selection game comes off on October 30, 2021, at Ave-Xevi in the Akatsi North district which also serves as home grounds for Green Sports Academy.”

“30 talented young soccer players within the age range of 14-20 years are expected to be recruited after the final selection day, to begin the football component of the academy.

“Green Sports Academy will soon embark on a talent hunt for young talented boxers within the region,” they added.

Joyce Blessing Hit Me With Her Bathroom Slipper Just after She Realised I Realized...