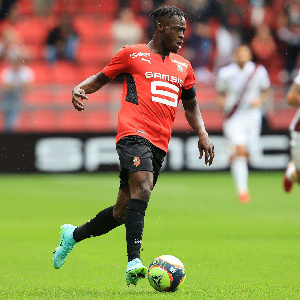 Ghana winger Kamaldeen Sulemana continue to impress in his debut season in France as he scored again this weekend.

Sulemana netted a stunning goal for Rennes in their clash with Metz in Ligue 1 on Sunday afternoon.

Prior to the international break, Sulemana was in great form, assisting the opener as Rennes ended PSG’s unbeaten run.

He excelled for Ghana on international duty as the Black Stars secured back-to-back wins over Zimbabwe to revive World Cup qualification hopes.

Sulemana returned to Rennes and his back among the goals. He nutmegged his marker before hitting a superb strike.

It’s obvious the youngster has been given the luxury to express himself and the world is seeing the best version of him.

So far there is no doubt he made the right decision opting for a France and signing for Rennes amid huge interest from top European clubs including Ajax, Dortmund and Manchester United.

The 20-year-old has scored five goals in all competitions this season.

After a tricky 6 initial matches getting used to Ligue 1, Rennes winger Kamaldeen Sulemana (19) has bolted out of the gates: