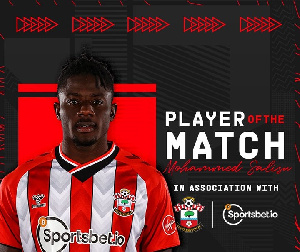 Defender Mohammed Salisu has been voted Southampton’s Player of the Match in their 1-0 victory over Leeds United on Saturday, October 16, 2021.

The Ghanaian guardsman produced a solid display to add to his impressive performances this season as the Saints kept a clean sheet at the St Mary’s.

The 22-year-old has seen a rapid development to his game and has become a mainstay in manager Ralph Hassenhutl’s team.

He featured in eight Premier League games this season, including helping the Saints to draws against Manchester United and Manchester City.

I Did It! – Ursula Owusu Boldly Reveals She Explored With Lesbianism In SHS

Fixing the potential: What must the entire world do now and write-up Covid-19?