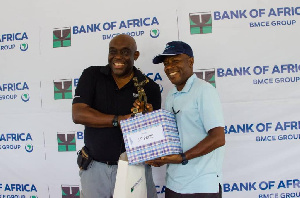 Managing Director of Bank of Africa, Kobby Andah presenting the prize to the Men’s Category A winner

John Quarshie and Jenny Le Hong recorded respective net scores of 64 and 61 to win the respective Category A men’s and ladies titles of this year’s Bank of Africa (BoA) President’s Putter held last Saturday at the Bok Nam Kim Golf Club in Accra.

Quarshie playing off handicap 13, produced also produced the lowest gross score of 77 to claim the men’s Category A title of the tournament which was held to celebrate the 85th birthday of the President of the Bok Nam Kim Golf Club, Air Commodore Kwame Korankye Pumpuni (Retired).

Le Hong won the Ladies Category A by three strokes after she carded a gross 78 off handicap 17.

Daisy Annor Apo who was in the mix for second place with three other golfers, played a two-under-par 64 to finish behind Le Hong while Catherine Fabbi (net 65) beat the evergreen Mona Captain Myles-Lamptey (net 68) to third place.

However, Myles-Lamptey who produced the lowest gross score of 77 in the ladies contest did not go home empty-handed as she won the Ladies Longest Drive title.

In the Men Category B event reserved for golfers with handicaps between 14.5 to 54.0, Bright Kobby shot a gross of 80 but was aided to victory by his handicap 20.

He pipped Michael Hurtubise who produced a net score of 61 off handicap 17 by one stroke while Justice Cudjoe also carded a 61 but placed third on countback.

The respective Men’s Closest to the Pin and Longest Drive awards were handed to Nana Yaw Bamfo and Yaw Barnafo.

He said golf was an alternative for persons who struggle to take long walks alone because an individual could cover over six miles during one game.

“I still play golf even though I did not play in this competition. This is a game that everybody must play and we thank Bank of Africa for coming on board to support this tournament,” Air Commodore Pumpuni said.

The Managing Director of Bank of Africa, Kobby Andah also assured that his outfit was committed to extending its three-year relationship with the club.

‘I have distanced myself from Kwabena Kwabena, KK Fosu’