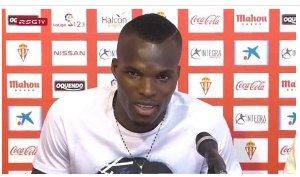 Turkey-based Ghanaian midfielder Isaac Cofie has insisted that various technical handlers of the Black Stars have not expanded their scope of scouting wide enough to include him in their monitoring process.

Cofie, 30, has scored once in 6 appearances in central midfield for Sivasspor in the Turkish Super Lig this season but is yet to earn consideration from the technical team of the Black Stars.

The former Genoa midfielder was handed an invitation by James Kwasi Appiah during his first spell but he has not been called up since.

The 1.78m midfielder believes the technical handlers have not cast their nets wider enough to include him in their monitoring scope.

“I don’t have a problem with anyone within the Black Stars but I think they have not cast their nets wide to cover the Turkish league. In the last call up [Benjamin Tetteh] was invited so I think the new coach will be turning his attention to the Turkish league. I believe this will offer us the opportunity to demonstrate what we have to the new coach,” he told Enoch Worlanyo on Asempa FM’s SportsNite show.

Cofie was scouted while playing juvenile football in Accra. He joined Genoa in 2010.

He has featured for clubs like Genoa, Torino, Sassuolo, Chievo Verona, Sporting Gijon, and now Sivasspor.