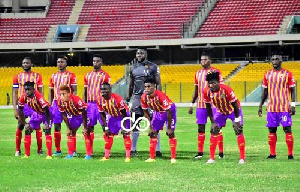 Hearts of Oak will depart to Morocco on Thursday evening with a 24-man squad ahead of their CAF Champions League preliminary round second leg game against Wydad Athletic Club.

The Phobians defeated Wydad Athletic Club 1-0 in the first leg encounter at the Accra Sports Stadium on Sunday.

Isaac Mensah scored the only goal of the game to give the Ghana Premier League champions an advantage ahead of the second-leg encounter this weekend.

The team will fly to Morocco with a 43-man contingent made up of 24 players, seven technical staff, management members.

Ghana FA Executive Council member Dr Randy Abbey will be the leader of delegation for the team to Morocco.

Hearts will board the Emirate airline to Rabat for the game later today.

The Phobians will be hoping to make the money zone for the first time since 2006.

Why only 17 Black Stars players trained on Tuesday