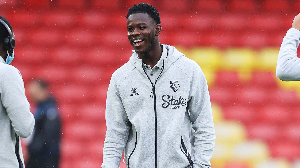 Kwadwo Baah has expressed his desire to make Claudio Ranieri trust him in an attempt to get regular playing time at Watford.

The Germany youth international of Ghanaian descent joined Vicarage Road from League Two side Rochdale in May 2021.

Nevertheless, he is yet to make his Hornets debut despite being an unused substitute on three occasions for the first team.

In a chat with the club website, the teenager stated that he is staying patient for his big chance at Hertfordshire, but he must convince the Italian tactician first.

“With a new head coach, it is almost like a new beginning for me,” said Baah.

“I’m eager to show him what I can do and hopefully I can convince him to trust me to involve me in some games.

“I joined Watford with the aim of playing in the Premier League, which would be a dream come true. Until that time comes, I’m just going to keep training very hard, doing my best and trying to score goals if I’m selected for the Under-23s.

“He [Ranieri] is a really good guy, he gives me and the rest of the players a lot of really useful advice and I think together we can all move forward.

“With my recent experiences with Germany hopefully I can continue to improve and play a small part in that.”

Baah was on target twice in Germany U19s Four Nations Cup title in Slovakia earlier this month and he hopes that aids his growth at Watford.

“I was born near Stuttgart, so that’s how I qualify to play for Germany,” he continued.

“My dad used to play football out there semi-professionally, and my parents probably lived there for around 25 to 30 years.

“We moved to Ghana when I was still very young and then to England when I was five, but as I got older and started to realise playing for Germany might be a possibility, I thought it sounded like a really exciting opportunity.

“It was a great chance to learn about different brands of football and different tactics. I think the experience has helped my understanding of the game, and also winning a trophy was a really great feeling.”

#FixTheCountry: I’ve constantly supported the agenda given that the commencing of my job –...

Ghana and United Arab Emirates to collaborate on education

I am all set to commit in soccer – Wontumi