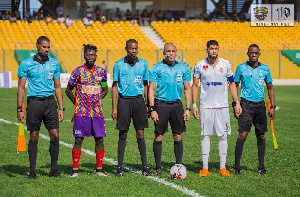 play videoHearts were not happy with officiating in the 1st leg

• Hearts were not happy with officiating in the 1st leg

The president of the Confederation of African Football, Dr Patrice Motsepe has assured Accra Hearts of Oak of fair officiating in their Champions League game against Wydad Athletic Club [WAC] on Sunday, October 24, 2021.

Supporters of the Accra-based club were not pleased with the level of officiating in the first leg game played at the Accra Sports Stadium last week.

Despite winning by a lone goal, the Phobians were unhappy about some of the decisions by referee Helder Martins Rodrigues De Carvalho.

Ahead of the second leg game, many Hearts of Oak followers believe the Moroccans might take advantage of the bad officiating to knock the Ghanaian side out of the competition.

However, speaking during his meeting with the press in Ghana, Dr Patrice Motsepe allayed any fears by the Phobian family.

According to him, poor officiating is affecting CAF’s chances of getting sponsorship hence the complaints from Hearts would be treated as a priority ahead of the next game on Sunday.

“This is one of the things which is getting emergency,” Dr Patrice Motsepe responded when a Ghanaian journalist complained about poor officiating in Hearts of Oak’s game.

He added, “I’m talking of getting funding and finance for African football. I can’t talk about this when the quality of referring is not world-class.”

In assuring fair officiating, the CAF president said, “I can assure you it’s receiving urgent attention and that is why VAR is critically important.”

GWCL to reduce h2o source to pieces of Accra from Thursday