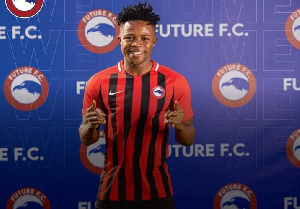 Taylor joins the newly-promoted side on a three-year deal from Ghana Premier League outfit Karela United for an undisclosed fee.

The 21-year-old played a huge role for the side in the 2021/22 season as they finished 8th on the league standings.

He emerged as the Ghana Premier League top scorer with 18 goals. He also provided seven assists in 31 games for the ‘Pride of the West’.

Earlier, report suggested he was close to joining Tunisian side Esperance but the move fell through.

The 2021-22 campaign of the Egyptian Premier League will commence Sunday, October 24, 2021, as Future FC take on newly-promoted Pharco FC at home.

KiDi, Kelvyn Boy, other folks did not respond to my connect with for functions