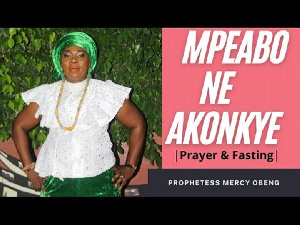 Appearing on the Weekend Morning Show’ on Rainbow Radio 87.5Fm, the Prophetess disclosed that life had been terrible for her.

She told host Nhyiraba Kwabena Asirifi that she had contemplated suicide until God intervened.

The musician disclosed that at a point, she had to walk for weeks without taking her bath because she had no money to survive.

According to her, she was also sleeping in a church building because she had nowhere to sleep.

To survive, she was doing laundry for people when the opportunity arrived.

Prophetess Mercy Obeng said there was one Saturday she had gone to wash for someone and was going back to the church building when she met a prophet who prophesied on her life.

The prophet told her God had revealed to him that she was going to do his work and be a great musician.

As shocked as she was, she could not believe she had heard because she did not know the prophet and had not met him before hence the message she received was genuine.

The musician added that from that point, she dedicated herself to God’s work and was preaching in commercial buses where she met her husband who is also an evangelist.

According to her, she met the husband in a bus who was also preaching the word of God and the rest have been history.

She posited that the song is to inspire people who are going through similar problems.

God he noted is faithful and when they get closer to him, he would take them out of their challenges.

Salary increment for community sector personnel has not been frozen – Akufo-Addo assures TUC...

Man who shot friend over ¢5 debt charged with murder