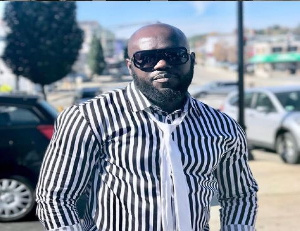 He is now based in the United States of America

He is happily married with 2 kids

Popular Kumawood actor, Isaac Amoako has detailed the struggles he went through when he travelled to the US to start life all over again.

According to him, having starred in so many movies in Ghana, it was difficult for him to get menial jobs to do. This he explained was because the Ghanaians he mostly met doing the same job couldn’t stop talking about him.

Some even went as far as telling the White supervisors who he was back home and why they found it difficult to see him doing such accepting such job offers.

“It comes with a lot of stress, back in Ghana stars cannot do certain things because of their celebrity status. In the US, the question I mostly got was are you not Agya Amoako, the movie star? what are you doing here? The way the person respects you back home and is now seeing you doing the job with you in the US, always cause discomfort.

“But I came to realise that, when things go bad in life, you have to go back and start. So I told myself if I don’t start all over in the US and I make the stardom get into my way, I will be doomed.”

He added that he had to explain to his employers, that he was in the US just for a few months.

He is now happily married and has children in the US after his struggling beginning.

You happen to be these types of a idiot – Okesse1 berates Andy Dosty...

Akonnor points out ambition for Oct helpful from Mali

Video clip: Blue Eyed Nigerian Lady Reunited With Her Partner, See How It All...