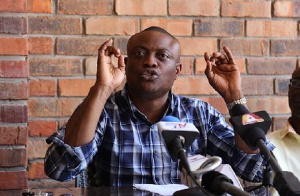 Private legal practitioner, Maurice Ampaw has stressed the need for members of the clergy to fully appreciate the superiority of the constitution.

According to lawyer Ampaw, Ghana has gotten to a point where religion has been elevated above the constitution hence the reason some prophets are able to issue false prophecies with impunity.

“The problem today is that we have given too much respect to pastors and the church and religion to the extent that religion is now more influential than the law. None of the people are able to take the pastors on. As soon as you try you will be tagged a witch.

“Even when a church is disturbing in your neighbourhood and you complain all their prayers will be directed towards you. A lot of people don’t want to be tagged and because of that when their rights are being violated, they keep quiet,” he stressed.

He however noted that a new era has dawned in law enforcement in Ghana following the appointment of Dr George Akuffo Dampare as the Inspector General of Police, thus the need for pastors and prophets especially to be cautious in issuing prophecies that induce fear.

His comment is on the back of the recent arrest of dancehall artiste, Shatta Wale, a pastor named Jesus Ahuofe and three other persons within the camp of the artiste.

Jesus Ahuofe in an interview with an Accra-based Accra FM claimed that Shatta Wale will be shot on Monday, October 18, 2021.

The artiste on the said date with the help of some persons within his camp claimed on social media that he has been attacked and shot by some unknown gunmen.

When they were arraigned before the court, all the suspects were remanded into police custody on Thursday, October 21, 2021.

But speaking with Oman Channel, lawyer Maurice Ampaw supported Shatta Wale’s line of action insisting that the artiste acted in the public interest by exposing a false prophet who had caused him to endure fear.

“We have criminalized Shatta’s actions and I don’t have an issue with that because his shooting claim was fake. But you can commit a crime to expose a crime, and what Shatta did was to expose a crime. Let me give you an example; if you are passing by a house and you hear a woman shouting that she is being killed, you may jump over the wall of the house to go see what is happening in there. Once you do that you have committed a criminal offence of unlawful entry but then your purpose may be justified because you did so with the intention of going to save the woman,” he stated.

Special voting for elections 2020: What you need to know [ARTICLE]