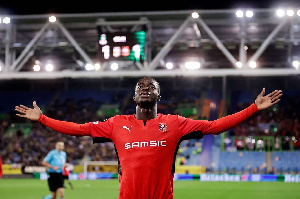 Talented Ghanaian winger, Kamaldeen Sulemana has been rated as the second most in-form player in Europe, only behind Liverpool’s Mohammed Salah.

According to the football statistics website, whoscored.com, Sulemana scored a rating of 8.14 in the last six games in Europe’s top five leagues, while Salah had 8.88 following a blistering month for the Reds.

The Stade Rennais wonder-boy is ahead of Real Madrid and French forward Karim Benzema and Bundesliga top scorer Robert Lewandowski into the top ten most in-form players. The youngster was the newest entry on the list.

“One of the breakout stars in the 2021/22 Ligue 1 season, Kamaldeen Sulemana has taken to the rigours of French football with ease. The teenage winger has been exceptional for Rennes this campaign and his superb form of late has yielded a fine rating of 8.14,” wrote whoscored.com.

The 19-year-old, who joined the French outfit in the summer transfer window from FC Norsdhaelland has been in phenomenal form.

He has netted four goals in the Ligue 1 and has an assist to his credit. Sulemana has also been in the Team of the Week four times this season.

His outstanding display has seen him hogged the headlines ahead of the likes of Lionel Messi, Kylian Mbappe and Neymar Jnr.

???? The full European form rankings with Mohamed Salah the in-form player on the continent

60 Yrs On: Ghana’s Republic, Africa’s Independence and the declining electricity of Pan-Afrikanism