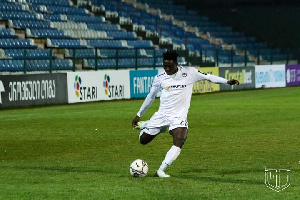 The former Asante Kotoko player was a second half substitute but was key as they collected all three points on the road.

The visitors opened the scoring through Tornike Akhkvlediani after just a minute before adding his second nine minutes later to make 2-0.

But Nigerian player Ukwubile Raphael Ckukwurah pulled one back for the hosts in the 27th minute.

Dzmitry Rekish restored the two goal lead in the43rd minute as Torpedo Kutaisi make it back to back games without defeat.

Inkoom has made 22 caps and scored once for Torpedo Kutaisi this season in the Georgian top-flight.

Accra Is My Residence – Depressed Davido Slams Nigerians As He Runs to Ghana...