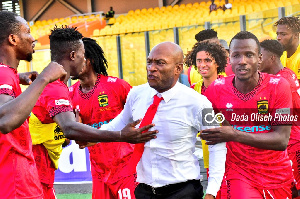 • Coach Prosper Nartey has expressed delight in his sides vicotry

• Asante Kotoko recovered from a goal down to beat Dreams FC

• The coach believes the win was amazing

Coach Prosper Nartey Ogum, the head coach of Asante Kotoko has described his debut win in the Ghana Premier League as an ‘amazing victory.’

The Porcupine Warriors came from behind to beat Dreams FC 3-1 at the Accra Sports Stadium on Saturday, October 30, 2021.

Ghana’s U-20 star, Fatawu Issahaku scored on his league debut for the ‘Still Believe’ boys after a goalless first half.

However, the Porcupine Warriors managed to pull parity through Salifu Mudasiru who came on as a substitute before Isaac Oppong and Richmond Lamptey scored to make it 3-1.

Reacting to their win, coach Prosper Nartey said, “It was an amazing victory, if you look at the way the goals came, getting to the dying embers of the game where we were down and under pressure, looking at how the boys kept to the game plan, the team’s shape and how we were able to place those combination passes, I will say it was an amazing game.”

Although pundits had questioned the coach’s substitutions, he explained in his post-match presser why he made a decision to substitute their Brazilian star, Fabio Gama.

He said; “It wasn’t a wrong substitution I did, we were losing the second balls in the middle of the park. I realized Gama was a little bit tired because they were kicking him all over the place, so I decided to pull him instead of us playing two offensive midfielders and bring in Richard Boadu and add up to Mudasiru because he is a bit mobile so he will pull back and join in when we lose the ball.”

Yunus Musah ruled out for three weeks with injury

Initially Indicator Of Regret? Regina Daniels Admits She Is Continue to A Boy or...