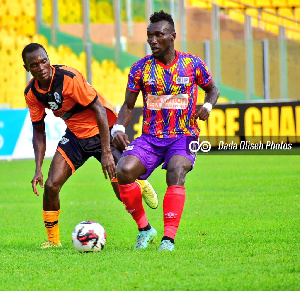 Hearts of Oak on Sunday afternoon had to settle for a goalless draw in their game against Legon Cities FC in the team’s first match of the 2021/22 Ghana Premier League season.

The Phobians were crowned champions last season at the end of a stellar campaign where the touch of head coach Samuel Boadu proved crucial in the second round of the campaign.

With the aim of retaining the league title this season, Hearts of Oak faced Legon Cities FC in the opening match of the new season hoping to record a win to start off on a bright note.

However, with the opponent proving very strong throughout 90 minutes, the action-packed encounter has ended in a goalless draw.

Today’s match is a continuation of the new Ghana Premier League season that has commenced this weekend.

The campaign kicked off last Friday when Accra Lions drew 1-1 against Elmina Sharks at the Accra Sports Stadium.

Subsequently on Saturday, there was an exciting game played between Dreams FC and Asante Kotoko.

Don’t wait for E-levy, see to it that Police Service is resourced – Security...

Report Nigel Gaisie to the police right before he kills your daughter – DJ...