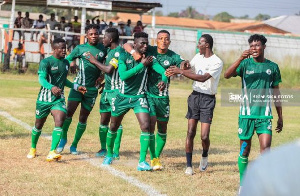 King Faisal got off to a brilliant start following a 1-0 victory over WAFA courtesy a late strike from Zubairu Ibrahim.

The two teams created some opportunities in the first half but none of them managed to get a goal to separate the two teams.

In the second half, the advantage went to the hosts after Marvin Owusu was given his marching orders in the 52nd minute.

The game went on to additional time where Ibrahim struck to give his side a much-needed advantage.

The Insha Allah boys are now 5th on the log whilst WAFA are placed 16th.

I really do not have time to reply any jobless man or woman who...