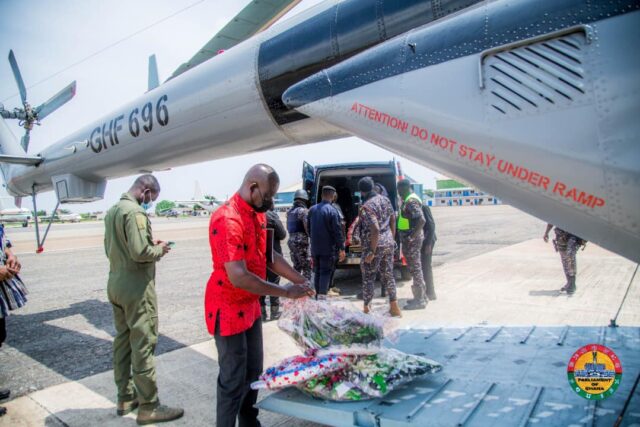 The final funeral rites for the dispatch rider of Speaker of Parliament, Alban Bagbin‘s convoy, Chief Inspector Abednego Kaachire Kofie, has been held.

A burial service was held in his memory at the Inter-Denominational Church, National Police Training School, Tesano, Accra.

In attendance were members of parliament including, the Minority Chief Whip and Asawase MP, Muntaka Mubarak, and Krachi West MP, Helen Adjoa Ntoso.https://1f9166dc6a9cd04d792a180b79b02388.safeframe.googlesyndication.com/safeframe/1-0-38/html/container.html

Other high-powered persons from the Speaker’s Secretariat, personnel, and heads of the various security services were also present to mourn with the deceased’s family.

Despite mourners being drowned in tears, colleague servicemen lighted up spirits with morale and motorbike display sessions.

The late policeman who served for 21 years joined the service in October 2000 and was admired by many for his passion, dedication, and integrity.

Inspector Kofi who was also a member of an advanced convoy of Mr Bagbin was crushed to death at Juaso in the Ashanti Region on August 6, 2021.

The driver of the Nissan Sentra with registration number GT 2173-21, travelling from the Kumasi-Nkawkaw section of the Kumasi-Accra road, in an attempt to overtake the articulated truck ahead of him, crushed the motorbike, killing the rider instantly.

The team was heading to Wa to await the arrival of the Speaker on Saturday when the incident happened.

He joined the Parliamentary dispatch riders in 2009 and had, until his untimely demise, served four consecutive Speakers.

AFCON U-20 Champions, Black Satellites go away Mauritania for Ghana

Chadwick Boseman: Why did Black Panther have these a huge effects?