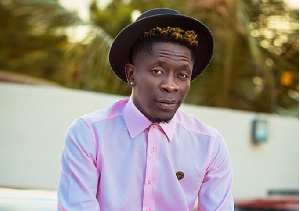 Entertainment journalist and nemesis of Shatta Wale, Arnold Asamoah-Baidoo, has sounded a word of caution to the Dancehall artiste. According to him, bathing in the sea would not make Shatta Wale immune to the law.

Arnold Asamoah shared his opinion on the supposed ‘spiritual bath’ that Shatta Wale, Medikal and the others took after being released from jail. Although Bulldog, acting as Shatta Wale’s manager, disputed the spirituality part of the beach bath, Arnold had this to say;

“Well, I think everyone has their believes and convictions, especially when it comes to spiritual matters. So what works for you is what you abide by. I don’t have a problem with them going through that exercise because I am sure they have a certain belief that when they do those things, any bad luck from going to prison and all will be washed away. That’s their belief. They have a strong conviction in that. And so I can’t begrudge them for going through that process.”

Conferring to Arnold, their actions should not be tagged with a sinister motive considering our roots as Africans.

“I don’t know why people would think that that is idol worshipping. We grew up with tradition and culture. Plus, spirituality. So I don’t see why anybody should have an issue with what they did.”

Having said that, Arnold maintains that the spiritual bath would not be a protection from the law if Shatta goes up against it.

Meanwhile, you can watch this week’s episode of Bloggers’ Forum below.

Mujkanovic hopeful of reviving the fortunes of Inter Allies