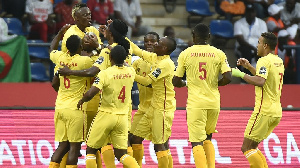 General Secretary of the Ethiopian Football Association, Bahiru Tilahun has explained the reason behind their decision to host the Black Stars in South Africa for the 2022 FIFA World Cup qualifier.

Ethiopia have been banned from hosting the 2022 World Cup qualifiers at the Bahir Dar Stadium in Addis Ababa after failing to meet the minimum club requirements by CAF Club Licensing criteria.

Thus the decision to move the game to a neutral ground.

According to the General Secretary, the decision to play in South Africa will help reduce the cost and expenses of the team.

“As everybody is aware of it about our national team for not playing at Bahir Dar Stadium is because of the ban from CAF due to the failure to fulfill the minimum requirements of the club licensing criteria of CAF.

“As a result of this, we are forced to play our home much in the other country and we chose another stadium and as we know our next match after Ghana, we gonna play in Harare, Zimbabwe. And we decided to choose Harare Stadium to host Ghana.

“But their stadium is also banned by CAF so we picked our second option South Africa and the South African FA is already cooperative to host us there, that’s why we decided to play there. He explained to Ghanasportspage.com.

“The main reason behind this is the finance issue, we gonna decrease our expense when we play in South Africa because we can use one route to fly to South Africa and then to Harare but if we play in Kenya we will go to Kenya and get back to Ethiopia and again Ethiopia to Harare this will increase our expense so the main reason is the finance issue.” He said.

Ethiopia host Ghana at the Orlando Stadium in South Africa in matchday five of the 2022 FIFA World Cup.