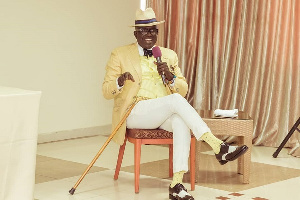 Fashion Mogul, Kwasi Kyei Darkwah popularly known as KKD has stated that he is thankful to the Ghana Broadcasting Cooperation, GBC for making him the journalist, presenter and a tourism advocate today. He made this known during an interview on the GTV Breakfast Show on November 2, 2021.

KKD the Finest is also known as His Royal Blackness and the Master Communicator, explained why he is called the ladies man.

He said “the ladies like civility, culture, excellence and enjoy the finer things in life and I try in everything I do to work towards eloquence, excellence and ladies appreciate that a lot,” according to his Royal Blackness.

Speaking about how he felt being back home, he commended the set designer for the Breakfast Show and reminisced his days at GBC.

He added that he started working at GBC when he was just 19years old and praised his former bosses for giving him the chance to be in the media space, a Brands Manager, a Culture and Tourism Promoter as well, adding that at GBC, there was always a time for one to prepare before going on air.

He mentioned that people like Okyeame Kwame would record his radio programs and sold them in Kumasi, in the Ashanti Region. He gave some media lessons stating that, “when in doubt, leave it out”.

KKD, the Finest stated that people do not recognize that there was more room at the top than the bottom and that people who got to the top must lend a helping hand to others and pull them up.

“People think too much about competition than collaboration”, according to his Royal Blackness.

My father said he made a mistake naming me ‘Denis,’ I don’t like the...

Insult Olympics – Shatta Wale Reacts with Curses After Twene Jonas Insulted Him For...